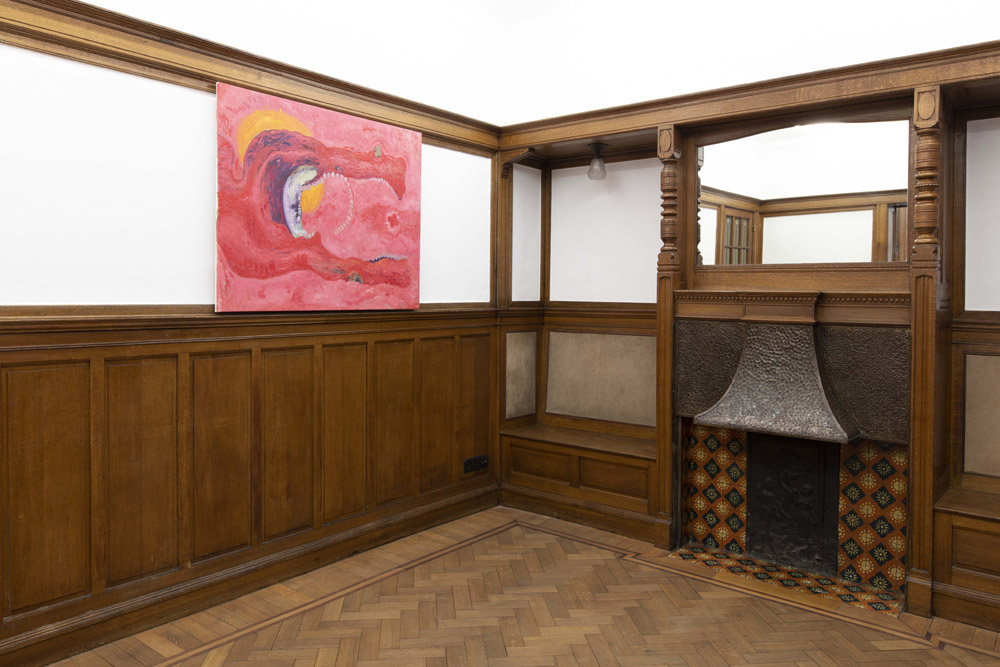 Contemporary beauty standards favour neatly arranged teeth in a shade of white. There are a lot of teeth in Brilant Milazimi’s latest paintings. Teeth pressed together between peeled back lips, enlarged by a magnifying glass, that look like they have sprung forth from the mouth of their wearer. Endless rows of teeth exposed in a mouth with a hanging out tongue that tries to catch a lollipop. A red sea creature floating in red water presents its teeth like tentacles. Another sea dweller consists of nothing but a circular amassment of choppers. All these teeth are straight and white and regular, but they have little in common with Hollywood’s celebration of unflawed rows of mineral-coated nerve fibre. Almost caricatures of the big, bright American Smile, in Brilant Milazimi’s works they are both weapon and camouflage: signifiers of that which is usually well hidden behind polite, often fake smiles.

But we should not be mistaken by these expressive figures and faces. Brilant Milazimi’s works are neither allegorical nor anecdotal. They are visually powerful articulations of that which is oppressed; of trauma and what it means to live in Kosovo today. A realism interspersed with of dream-like fragments of memory resonates from these canvases, and the fake smile is but a symptom of an everyday life where social interaction is easily overshadowed by deeper lying tensions.

In Everything Started at Home we see an abstract house sketched with few lines, in front of it an expanse of water. A white bird hovers above it, a dog’s silhouette can be seen in the courtyard, and a crocodile lurks around the corner. Perspectives merge in a dreamy surrealism, while the title suggests a more psychological reading: looking back at our roots, we encounter the place where we learned most of what we know today.

Brilant Milazimi paints humans with grotesque faces and animals with human features. He juxtaposes the dark side of human existence with peaceful gatherings of animal creatures with elongated bodies. Dogs circulate around a strange green spot. Red turtles float across an abstract background that could be another animal or just some water plant. These paintings drawing on personal and collective memory offer an intuitive analysis of a contemporary condition of struggle and negotiation, of balancing feelings, of hope and freedom as well as coping with reality. They mirror Kosovo’s psychological state of mind in scenarios both familiar and alien. Brilant Milazimi translates his perception of the world that surrounds him into images that are bitter, funny, tender, and weird all at the same time. Driven by the machinery of the unconscious, and inspired by the imaginaries of fictional universes, he finds expressions both sinister and poetical for an approach to the society he lives in: the exaggerated physiognomies and the highlighted symbolism of the teeth or the features of the animals are visual manifestations that trigger memories as much as they point to the present and its conflicts.