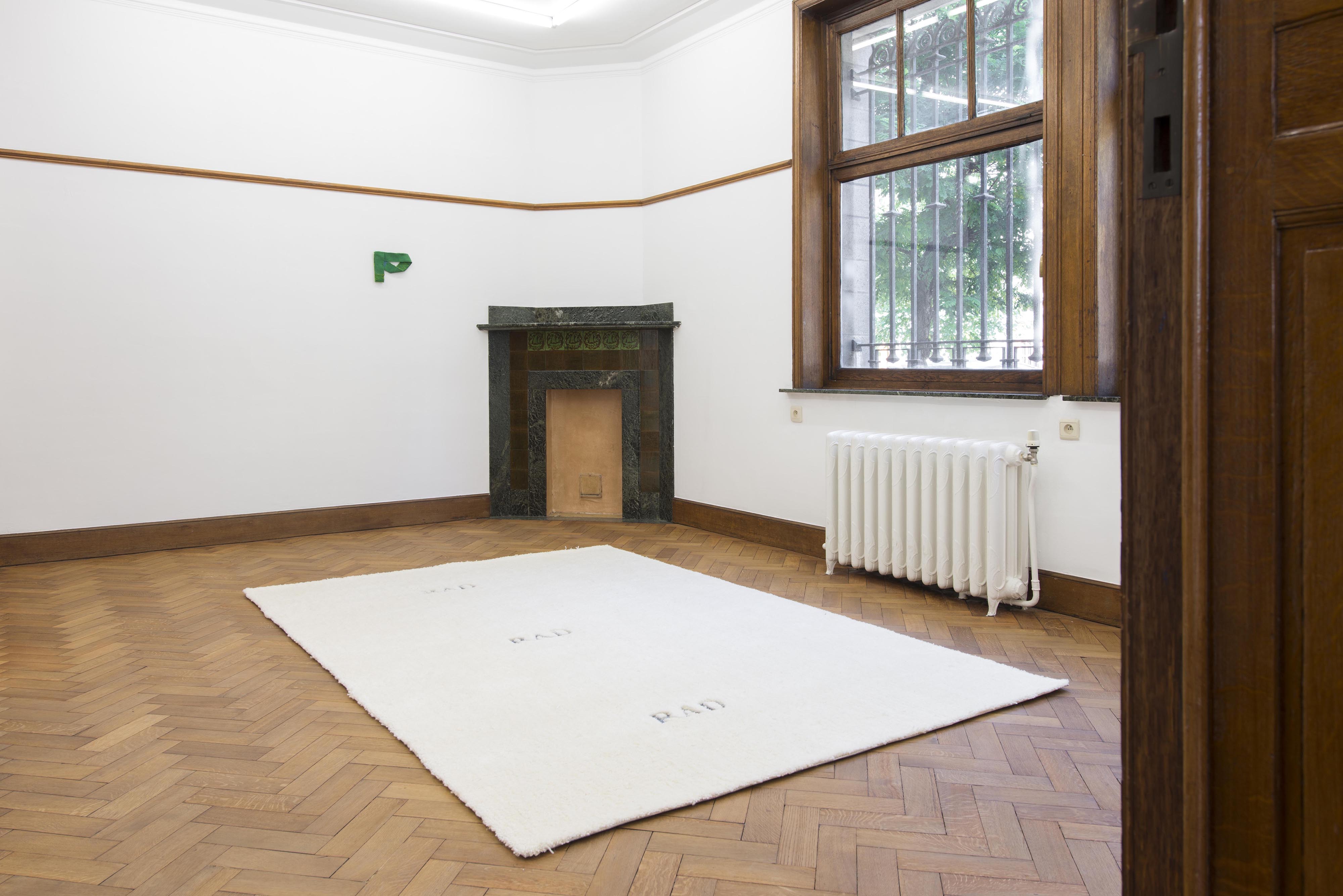 Hana Miletić’s exhibition "Retour au travail" will comprise a new body of work a hand-tufted carpet (RAD, 2019), as well as works from her on-going series Materials.
Regeneracija is a pile carpet factory that was founded by the Socialist Federal Republic of Yugoslavia in the 1950’s in Zabok, in the countryside not far from Zagreb. It is one of the few factories that was not sold and dismantled following the privatization processes after the Yugoslav Wars in the 1990’s. Miletić was invited by the factory to create a series of unique carpets in collaboration with their craftswomen/men. The carpets produced by Regeneracija are hand-tufted with wool that is locally sourced and dyed in-house. Miletić supplied the factory with found materials from public spaces, such as industrially produced tarpaulins that companies use on their construction sites to hide the façades and/or to create a space for advertising. Having remarked that these woven tarpaulins have the same mesh as the typical light grey, polyester backing used for tufting, she realized that they would be well-suited for the technique of tufting. Tufting machines use pneumatic force to press a U-shaped piece of yarn through the backing fabric. The height of the pile is altered by cutting the yarn shorter. For RAD (2019) the yarn was not trimmed in order to show the different hands that have worked on the carpet. The initial lettering of the branding of the tarpaulin was partially covered to reveal, or create a new word– RAD, meaning work or labour in the Croatian language, depending on the context in which it is used. The color of the carpet corresponds to the color of the tarpaulin that it was based on.
Materials is an on-going series of small to medium-scale handwoven textiles, that were already part of Miletić’s solo-exhibition at WIELS in 2018 as well as her participation in the Sharjah Biennial in 2017. Though at first glance their design may seem abstract and arbitrary, they are based on photographs that Miletić takes with a small digital camera in the streets of Brussels and Zagreb. They most often relate to pictures of damage/breakage in public spaces such as broken car parts (mirrors, headlights and windows), doors, windows on buildings, etc. that were mended in creative, improvised ways by their owners, mostly by means of tape. The colours and textures of each fabric are based on the materials that were captured in the photograph. Approaching the medium of weaving as a metaphorical act, Miletić uses weaving as a gesture of care and repair, as a process that allows her to consciously deal with conditions of damage and neglect.