Degenerative Imaging in the Dark 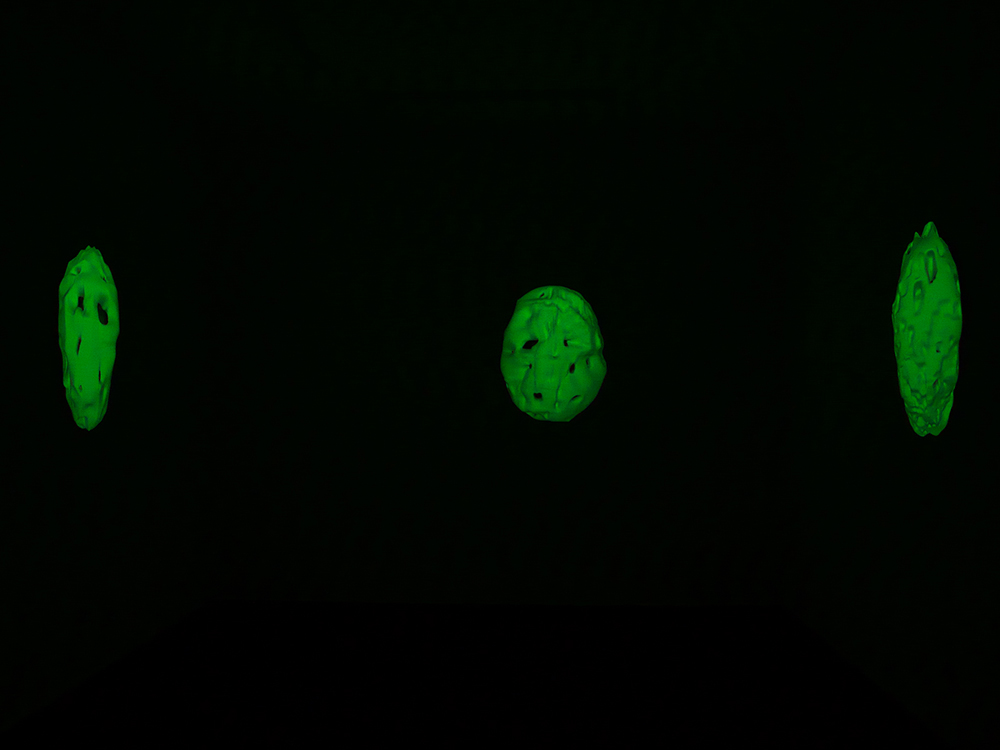 IMAGE – Jessup’s body suddenly becomes two bodies. One remains huddled on its knees vomiting; the other takes shape outside the first body and then WHOOSHES UP into the sky until he is hardly more than a spot, visible by a curious LUMINOSITY about him. Down around the fire, the others seem entirely innocent of this extraordinary event. A dog wanders into the ring of sprawling men, sniffs at Jessup’s first body, still on its knees –

IMAGE – The SCREEN is now a dull, matted WHITE, as if painted with heavy impasto streaks. The yellow of the lizard slowly leaks out into the whiteness, staining it. Losing its color, the lizard disappears. The a strange pulpy shape appears, fissured and creviced, a grayish blob, recognizable perhaps to biologists as a human brain, which folds and slithers into itself to take on other shapes, changing into soft, pulsating globules of matter, insinuatingly sexual, oleaginous in movement. What we are seeing is a de-evolution of the brain as it passes backward across the evolutionary continuum – through the brain of an alligator, then a codfish – until it oozes into the primitive, linear ridged nervous system of a worm. It disappears –

IMAGE – Another biological dematuration process. Blobs of substance, grayish, constantly folding and unfolding slowly into curled up, loaf-like cracked and creviced adult brains, or the more simplified shapes of the brain of a six-month embryo; to the vermiform structure of the brain of a seven-week embryo; finally the brain of a three-week embryo, hardly more than a hose-like structure with something stuck in its gullet, the bulging tip of a prosencephalon hanging down at the end of the thick snake-like thing as if it were ashamed –

IMAGE – the SCREEN grows DARKER and DARKER until everything is silently, impenetrably BLACK…infinitely down below where a flickering spot, perhaps the last conscious image of the fire where Jessup had been sitting… then – SUDDENLY – an unbearable FLASH of pure white light incandescent in the fraction-of-a-second explosion of pure energy. Then it is all BLACK again –

IMAGE – Enormous FLAMES, unbelievably hot, out of which emanate sudden EXPLOSIONS. One of these white-orange FLARES zigzags across the flaming face of the SCREEN, like a crevasse opening up in the arctic ice –

IMAGE – Suddenly, NOTHING IS LEFT to see but this jagged crack stretch ing obliquely up, as if the SCREEN itself were about to crack open –

IMAGE – Everything else is BLACK –

IMAGE – The crack is flaming red, then purple, then blue –

IMAGE – A violent series of images, none lasting longer than a second –

IMAGE – A flaming cloud of gasses, hydrogen and helium WHOOSES across the screen at 90,000,000 mph, throbbing as it cools and contracts with gravity. Another such cloud. Another –

IMAGE – A blue cloud of gasses, now hotter and hotter and redder and redder, as its trillions and trillions of atomic bits crush in on each other in a mutual gravitational attraction. The cloud is a flaming ball – a star, a sun. At the critical level of 20,000,000 degrees Fahrenheit it ignites and burns – nuclear EXPOLOSION following nuclear EXPLOSION –

IMAGE – A spiral arm of the Milky Way galaxy… swirling tendrils of the primal mist…a water molecule freezing into an ice crystal… a flaming yellow mass, the sun, surrounded by an iridescent halo of ice crystals and grains of rock or iron…the coalescence of small fragments into a larger fragment as the central fragment sweeps its neighboring fragments into its gravitational pull-

IMAGE – All this flickering imagery is taking place across the blue, jagged crack that seems to be splitting the SCREEN. The crack never disappears but is a constant presence –

IMAGE – The crack ERUPTS, spewing blinding light out like lava, the first CABALISTIC emanation of LIGHT -


IMAGE – Everything abruptly condenses back into BLACKNESS again. The blue crack is gone. In its place, a brownish figure, a molten mass of substance, appearing to have arms and legs and a head but so protean that the limbs and distinguishing features keep dissolving or extruding, bubbling up here and there, swelling and contracting. It moves in surf-like emanations, expanding and lapping in slow exorable waves –

IMAGE – The molten mass emerges larger and larger. Its substance seems to be iridescent, flaring with tiny flames –

IMAGE – Behind it, the screen is now GOLD –

IMAGE – A CLOSER VIEW of the mass; tiny flames are exploding neural matter –

IMAGE – Now a large YELLLOW IGUANA, its prehistoric jaws slightly agape, its tongue flicking in and out. The lizard waddles across the expanse of GOLDEN SCREEN toward the pulsating, flaring mass of brown substance. It stops about halfway, suddenly wart, frightened. It edges on slowly, cautiously –

IMAGE – It’s engulfed by the flaming molten substance. Its limbs are wrenched, ripped with a sickening SCREAM of bone and muscle, out of their sockets. The pieces of the lizard are lifted up within the molten substance by the improvisations of arms, and the shapeless head bows to devour the lizard –

IMAGE – It slowly surges around him –

IMAGE – The screen is again BLACK –

IMAGE – The feeling of a bottomless shaft, a WHOOSH of precipitous descent –

IMAGE – We see things in what seems to be a BLACK LIGHT. The SCREEN fills with the branches of a tree. In the distance a campfire flickering in the wind -

Supported by ERSTE Foundation, Municipality of Prishtina and the Ministry of Culture, Youth and Sports of the Republic of Kosovo.